As you walked through the halls of the conference center at The Orleans Hotel & Casino, you saw beautiful displays of our history and past events along with five flat screen monitors showing movies and pictorial videos depicting TNBA history. Our historian, Mr. Wade Broughton, did a great job highlighting TNBA.

The Gospel Fest was again another great event. The last time we were here, this event was sold out. This year we did not run out of tickets or space. We had a larger room, printed more tickets, and was able to accommodate the increased volume of TNBA’ers that attended this event. The show was another success; we had increased audience participation and some of the choirs who participated in this event are still receiving calls for other events. This success was made possible by the efforts of Valerie K. Martin and Gwen Amie.

Some bowlers took some time off to golf. They said they had a great time. The weather was great, golfing was good and the awards ceremony afterward fun and lively. George Hull and Tracy Smith did a great job, kudos to you for your continued support to TNBA.

Congratulations to Our 2017 King and Queen.  King Lydell James and Queen Freda Sinclair 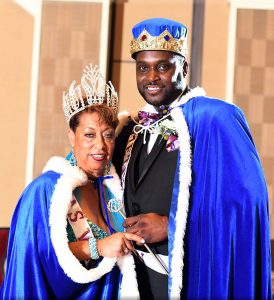 Our King and Queen contest is one of the fun projects we do every year, something that our Senates work hard on all year, a contest that accumulates to our highly anticipated Joe Thomas King & Queen Coronation Ball held during the ending of TNBA Week. There was a lot of excitement at the King and Queen Luncheon held before the ball and tons of suspense when the winners were announced at the ball. Congratulations King Lydel James from the New Jersey Bowling Senate and Queen Freda Sinclair from the Las Vegas Bowling Senate. Good luck and have fun representing TNBA. this year. Good job Pauline Davis.

High scoring, trash talking and just having fun. Our National Tournament Director Debbie Lewis worked very hard addressing our concerns. What makes our tournament such a good one is that there is an event for everyone. If you are a man, women, Junior or Senior, we have an event for you. Wow!!

Once again, the Battle of the Sexes was a sellout. This is a well-known signature event. We had bowlers coming from all over the United States and Bermuda just to bowl this event. After all that heckling and trash talking a winner was crowned.

Here are the scores:

Thank you, Bobby Richardson and Sue Mason. We loved this event. 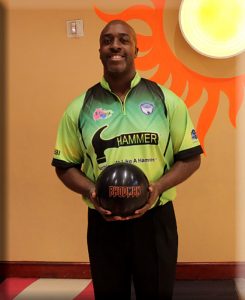 The new Rhodman Bowling Ball released by our partner Hammer and named after our Legend William (Bill) Rhodman hit the scene with a bang. Boom! Boom! Boom! was the sound of the new Rhodman ball hitting 10 pins 12 frames for a 300 game, for an 817 series. Yes, that was what our long-time member and Hammer Staff Member Fero Williams bowled during our team event. This is a great ball. There were many big scoring games bowled with this ball. This is a Ball that you will want to get and keep. It’s a part of our history. Thank You Hammer.

This was an event that you shouldn’t have missed. Our Juniors are getting 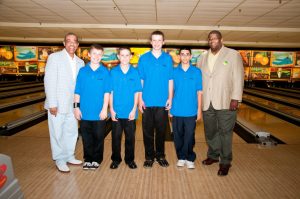 better and better. The scores that our Juniors put during their roll offs were unbelievable. The step ladder roll-off pitted Team “First State I” from the East against Team “DBS JRS #1” from the West. The East went on  to face Team “Hillside Majors” from the Central division by squeaking by the West by 7 pins!  The East marched on to face Team “Power Rangers” from the South by beating the Hillside Majors by 52 pins.  Team First State I met their match after facing the Power Rangers.  The south won the roll-off by beating the East by 201 pins.  Congratulation to our 2017 winners. This is the third consecutive win for the Juniors from the Southern Region. Keep up the good bowling.   (Southern team members – left to right: Daniel Havens, Daniel Bolan, Patricia Rosales, Wyatt Havens)

Winners of the Junior Regional tournament competed for the National Championship

This orientation was for all delegates to the National Bowling Association, Inc., Annual Convention. This seminar is to provide assistance and guidance to delegates in their duties as a representative of their local senate.

TNBA started of their 78th Annual National Convention by holding their 2017 Gospel Fest.  As a follow-up to the 2015 Gospel Fest held in Las Vegas, it’s theme was “Make a Joyful Noise – Part II.”  Rejoice in the spirit with TNBA.

Our Senate Kings and Queens vying to reign as our National Monarchs.

“In Memory of our departed Members”

The Junior Program & Scholarship  Program (JP & SP) of The National Bowling Association, Inc. sponsored their 8th Annual TNBA National Best Ball, Doubles Golf Tournament Wednesday, May 24, 2017.  If you enjoy being with great friends, or would just like to contribute to a good cause, that was the place to be. 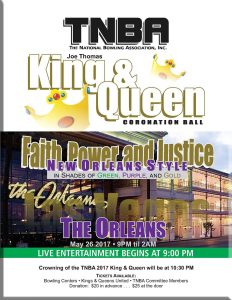